Tai Chi for Seniors in Burke Springfield a Success! 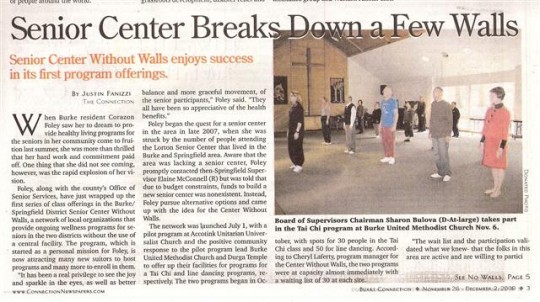 Article Appearing in the Burke Connection

According to Laferty, until the Dec. 3 meeting is held and other groups join the network, the exact schedule for the spring programs cannot be finalized. Laferty said that she expects the Tai Chi and line dancing to come back because of their proven popularity, and that Potomac River Running has already offering to host a walking and running club. If the early interest in the meeting itself is any indication, she said, the program is sure to have a vastly expanded menu of offerings. 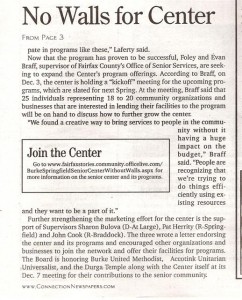 The network was launched July 1, with a pilot program at Accotink Unitarian Universalist Church and the positive community response to the pilot program lead Burke United Methodist Church and Durga Temple to offer up their facilities for programs for a Tai Chi and line dancing programs, respectively. The two programs began in October, with spots for 30 people in the Tai Chi class and 50 for line dancing. According to Cheryl Laferty, program manager for the Center Without Walls, the two programs were at capacity almost immediately with a waiting list of 30 at each site.

“The wait list and the participation validated what we knew- that the folks in this area are active and are willing to participate in programs like these,” Laferty said.