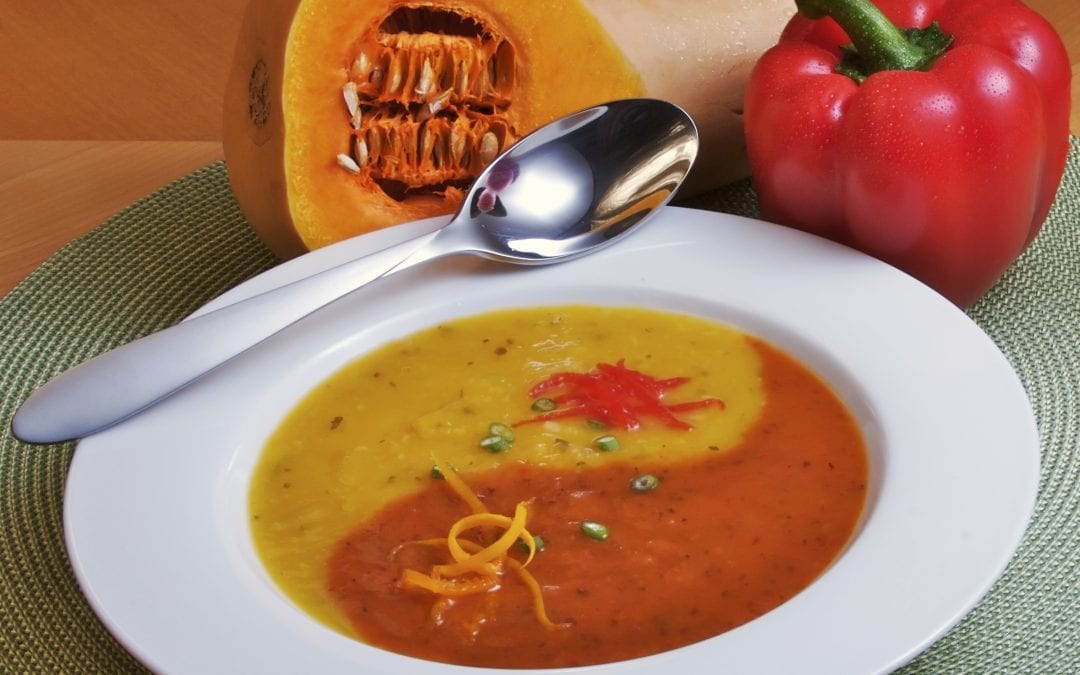 There are also certain fundamental qualities about soup that makes it soup, and not some other type of food. Similarly, there are certain basic fundamental principals that distinguish Tai Chi from other forms of activities.

Let’s dive into greater detail and begin by looking at the fundamental elements of soup:

Soup, by definition, is made of a broth that forms the base. Then, there are ingredients that are cooked into the broth. Most importantly, there is a certain ratio of ingredients to broth, or it wouldn’t be soup—it might be its next of kin, stew, for example.

Tai Chi has fundamental principals that form the foundation of the practice (the broth). Then, there are additional details and movements (the ingredients and heat) one must learn that build on the fundamentals. Most importantly, there are specific aspects of Tai Chi (how the broth, ingredients and heat are combined) that must be followed, or it wouldn’t be Tai Chi—it might be its related cousin, Shaolin Kung Fu, for example.

Ok, now you begin to see the similarities. But wait, there’s more!

Let us consider how there are different types of soup. Butternut squash soup is clearly soup, but it is quite different from chicken soup or beef soup.

Tai Chi can also be distinguished by differing styles, for example: Yang style compared to Chen style or Sun style. Just like each style of soup has a very different flavor and contains different ingredients, the various Tai Chi styles also have a very different flavor and have different movements. But remember, all styles of Tai Chi—like all styles of soup—have certain fundamentals that must be present for them to be what they are and not something else. 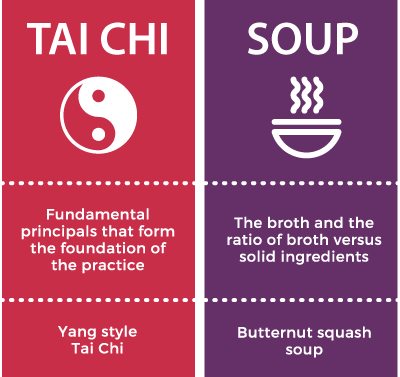 And now, the ingredients:

Just to add a further twist—you’ll find different recipes for the same style of soup! This butternut squash soup recipe calls for carrots and onion and 15 other ingredients, but that butternut squash soup recipe has onion and tart apples and 10 other ingredients. This could easily be compared to the different forms within the same Tai Chi styles—yes it is Tai Chi, and yes, it is the traditional Yang style of Tai Chi, but this one is the 24 short form and that one is the 108 long form.

Next come the subtleties:

There is the subtle variance of flavors and expression in the same recipe of soup—such as this butternut squash soup recipe calls for more curry powder and that butternut squash soup recipe was made with more garlic—just as the movements within the particular forms of Tai Chi may be practiced with different subtle expressions and flavors. The forms will look very similar, but have different nuances.

Some of these nuances and flavors will depend on the soup’s chef (the Tai Chi teacher). What is the chef’s background? Who did the chef learn from? What styles and flavors have influenced the chef? But, even within these variances and influences, the chef (teacher) still has to follow certain principals and rules if she/he is going to make soup and not stew (Tai Chi and not Shaolin Kung Fu), and if the soup being served is butternut squash soup and not chicken soup (Yang style and not Chen style).

In my classes I teach the Ch’eng Man Ching 37 form. This form is a Yang style form, but has a different “flavor” compared to what is considered “traditional” Yang style. Professor Ch’eng Man Ching created this variation (with permission from the Yang family) and began teaching it to his students. Over the years, as Professor Ch’eng’s skills and influences changed, the nuances and the subtle flavors that he taught—as he added to his Tai Chi soup—changed.

His students may have tasted numerous different subtle flavors of Professor Ch’eng’s recipe, and when they in turn started teaching, they added in their own skills and influences to create additional subtle flavor changes. So, just like visiting different restaurants and tasting the butternut squash soup made by different chefs, the flavor of your Tai Chi form may be just a little different from someone else’s. However, as long as you maintaining the principles, while you may taste different flavors, you will still be experiencing Tai Chi. 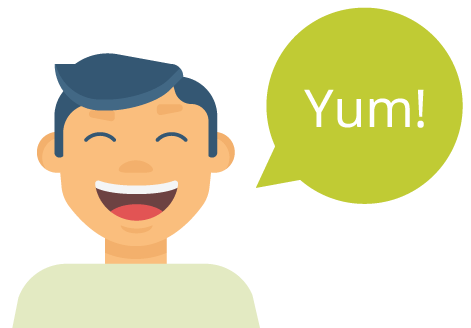 And now the final—and yummiest—similarities that make Tai Chi like soup:

Both Tai Chi and soup warm you from within, are good for your health, have recipes handed down through generations, come in many different flavors and most importantly, will always get better the longer you let them simmer.

So go out and taste some Tai Chi!

The flavors may be different, but it all tastes wonderful. Any questions? Or would you like my butternut squash soup recipe? Feel free to contact me.